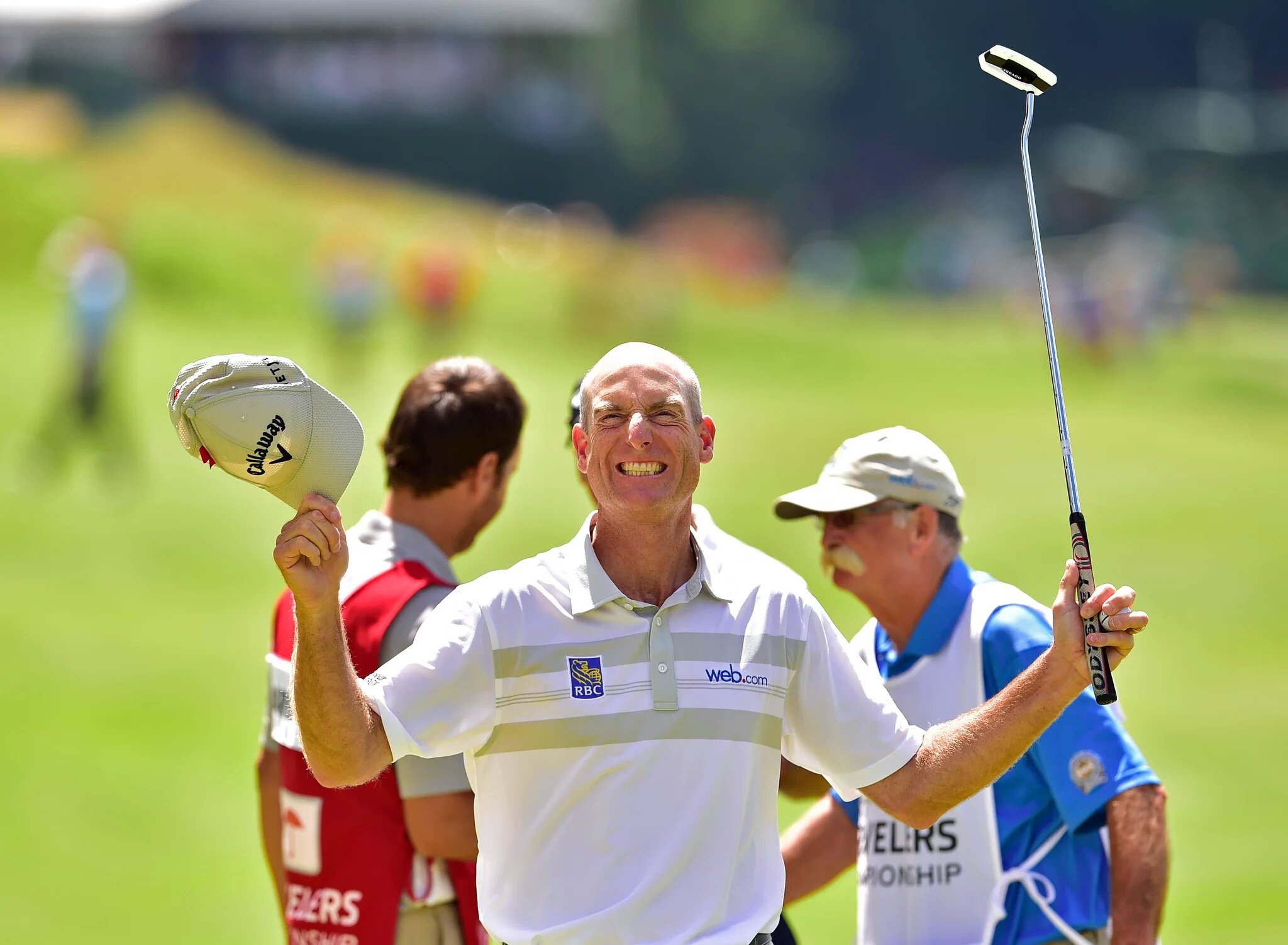 Donald, who is now 40-year-old, has quite an interesting history on the Island Hilton Head.
END_OF_DOCUMENT_TOKEN_TO_BE_REPLACED

Paul McGinley has been basking in the glory of the Ryder Cup success of Team Europe throughout the last week and his moves have been hailed as a master class in captaincy by many. But perhaps his greatest master class was the one that he didn’t make.

McGinley decided against pairing Northern Irishmen Graeme McDowell and Rory McIlroy together and according to McDowell, it was the best decision.

Speaking to a newspaper back home, G-Mac stated that the fact remains that he and McIlroy didn’t have the most impressive of records and at best, they could have played foursomes together but the captain knew what he was doing and he made the right call.

There was a lot of talk about how the two would take to being paired up for the event, especially after the litigation filed by the world number one against a management company that he had set up with his compatriot Graeme McDowell and that was one of the reasons why McGinley had said before the tournament that he had been thinking about splitting up the pairing.

Although both golfers maintained that they had patched things up between them, McGinley didn’t take any chances and paired McIlroy with Sergio Garcia thrice and once with Englishman Ian Poulter that resulted in 1-1-2 record while McDowell was paired with Victor Dubuisson for two victories in the foursomes.

Graeme McDowell further stated that he has been very fortunate over the years to have played with some of the best partners on golf – Ian Pouler, Miguel Angel Jimenez and Padraig Harrington back in 2008 and with McIlroy twice in 2010 and 2012 and any golfer would be proud of having such great partners in crimes, made all the more sweet with victory in all those Ryder Cup events as well.

Dustin Johnson is nowhere to be found on the turf while his fellow companions are vying for a successful tour. Whether it is the decision of the tour or his personal decision is yet to be seen. He might possibly be banned for the use of drug.

He, however, stated that he was taking break which is another way of saying that he is going for rehab. He is seen spending time with the family of Gretzky where for the member’s guest in the ladies club for Paulina he is caddying. Almost every day he is playing golf. It is then that the rumours of drug are spreading uselessly.

He is unusually catering to his physical, mental and emotional well-being. His privacy is respected since the PGA is not giving much of the information. It appears that he is not fully involved with golf since it is Paulina for whom he is caddying for. It is unsure whether her father would approve of that or not. It has become more of a priority for him. It also seems that he is giving more time to his social life and he does not wish to comment on it any further.

Extracurricular activities is what is in his mind and he sets time for play mixed with work or more so to impress Paulina’s caddy. He should not have forgotten that his priorities are different being a professional golfer but it is relaxation time that he is wanting and waiting for. Balancing the act and weighing the scales on an equal platform is what is mandatory.

His leave of absence from the office might not set him on a disadvantageous position which he might later regret it over the course of the time. May be he is going with the flow.

The putter is thrown in the air by Bubba Watson as he strikes a poor shot at the championship of US PGA. The delay by weather enforcement at the 96th Championship of the PGA suffered. The fourth round was however, completed by the champion who won the masters.

He was not there at the premises when the fellow companions were hauled from the turf of the golf. The delay lasted for 110 minutes. Over par of 72 was made by Watson but for four days he was not able to break 70. For the second time he donned the green jacket in his career. For the play offs of the Fed Ex Cup he is proving to be good as well as for the team of the Ryder Cup. His year is proving to be successful.

He is gaining coverage which is negative. In the contest of the long drive of America’s PGA he dodged it which he could do without. From the focus of the golf to diversion everything is seen and presumed from the Ryder Cup. Etiquette observed by him in the first two rounds was overshadowed. He did swear, tossed and cursed the clubs which in comparison to Rory Mcllroy was not worth.

Mcllroy was unable to answer the question whether it is tough to play with Watson or not. It is not always straight but it is the shape that matters. Bubba has a grip which is terrible with the swing of the golf which is also terrible. Rickie Fowler is one of the friends of Watson on tour. Both of them enjoy spending time with each other. He keeps on motivating Bubba as according to him he does get a bit aggressive but he does not get affected by it.

English golfer Lee Westwood believes he is ready to mount a late challenge as he looks to secure his place in the European team for the Ryder Cup tournament this season.

The veteran golfer and former world number one has not missed a match up against the American since he first made his appearance in the tournament back in 1997 at Valderrama and he is not willing to see his chance go by this season either.

The next clash of the two golfing teams will take place at Gleneagles in Scotland and it seems extremely difficult for the Englishman to maintain that record with his recent record going all but downhill at the moment. The former world number one finds himself at 35th ranked at the moment and unless there is a miracle of sorts in the upsurge of his form, he will surely not be a part of the tournament.

But he still has his hopes high after scoring 68 and 65 in the first two rounds of the Honda Classic to remain in contention till the third round of the event. And although he couldn’t win the title at the event, his form will provide him with a lot of hope as he looks to secure his place in the European Ryder Cup team.

He recently sacked his swing coach Sean Foley but doesn’t look to be bothering the Englishman. He stated that he hasn’t been hitting the ball well enough for the last year and a half but mentioned that he has the feeling that it’s on its way back.

He stated that feels that the penetration is back in the drive and he has also gone on to state that the distance in his drive has given him a lot of hope of late as well.

English golf hero Luke Donald has impressed his fans once again with his 2-shot lead post Round 1 at Sun City’s Nedbank Golf Challenge.

The impressive Sun City score is an able continuation of the Brit’s recent resurgence in his golfer career. Unfortunately a bad weather forced an early termination of opening stage of the Golf Challenge held at South Africa.

Donald had his 1st win of 2013 with the Dunlop Phoenix trophy once again last month in Japan. He was 5 under par post eleven holes while the play was terminated for the opening day given the constant lightning threats.

Almost 3 hours got wasted for bad weather conditions and it was just when Luke swayed up the leaderboard, the 1st thunderstorm hit the course, just after the local noon time.

The World’s # 15 proceeded with an amazing start with birdie from 5 ft on first & eagle from fifteen feet on par 5 second. The former World number 1 remained 3 under after 5 holes when all the golfers were shifted away from the Sun City course.

Donald was honored with the coveted Number One World ranking in 2011 as he came up with the prestigious PGA BMW Championship.

The 35-year-old Brit golfer picked up shots again as the tournament resumed – at the 8th & 9th to come out in thirty one, a couple of shots standing ahead of Thomas Bjorn (Denmark), Jamie Donaldson (Wales) & Brendon Jonge (Zimbabwe)- who noticed Luke’s approach to 9th spin back to hole for eagle 3.

Martin Kaymer, the defending champion of the prestigious tournament, was further a shot back on 2 under with Henrik Stenson (the European # 1) one under via 7. However, Justin Rose, the illustrious American Open Champion, was in the joint twenty-eights in the thirty man field post 4 bogeys in 1st 8 holes.